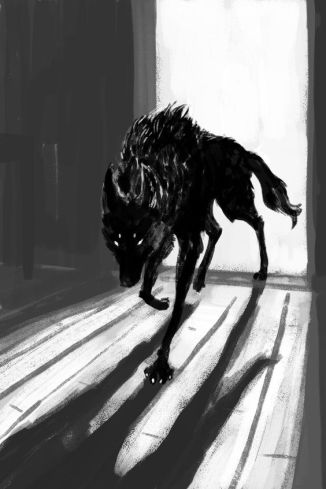 Red-eyed salivating wolf
growling with unemotional howls…
You attack without regret
and devour the souls of innocent victims.

Preys of your hunt
have found themselves chained and shackled
to their own hearts,
pulling for freedom in your devious game of tug-of-war…
They grasp for one last life-line
until their spirit cracks,
waiting for their heart to shatter.

– Some of those times,
the soul finds itself defeated…
while in this unfair game,
the salivating horrid wolf has cheated…

Looking for a life-line,
its victims call out for mercy,
pulling on the shackles and chains
which have left them imprisoned.

Faith seems so far out of reach,
but even in their blindness,
Hope still has the ability to teach.

Under the moonlight of a darkness that seems never ending,
The hounding wolf,
this insane perpetrator does have a weakness
It is the love and light,
where the hearts of his victims
will rise,
and defeat
in all the glory of their ascending.